An Urban Report – a developed Nation with a developing trend 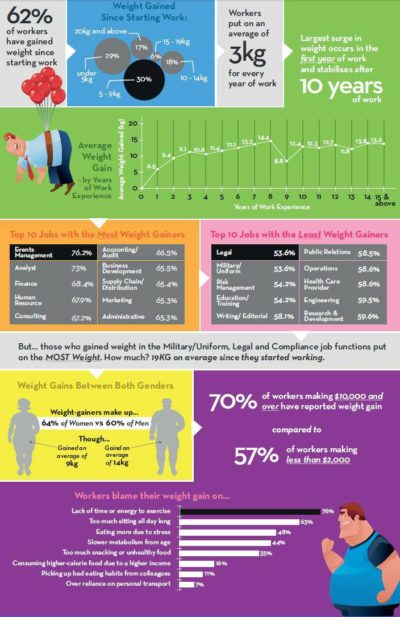 http://www.channelnewsasia.com/news/singapore/most-s-poreans-gain/1014294.html
Here is an interesting analysis on the relation between jobs and weight gain, published online on the channelnewsasia website.  The analysis is based on more than 3,500 Singaporean workers, conducted via a JobsCentral survey.

The findings are self-explanatory, and not surprising, given previous global trendings.  62% of the subjects reported gaining weight after starting work, putting on an average of 3kg for every year.

At the time the weight stabilises at 10 years after work, an average of 13.6kg has been gained at 15 years after.  In practical terms, an average-sized male Chinese adult (say 1.70m, at 72kg) with a BMI of 25, will be 85.6kg (or 29.6 BMI) at the prime of his career.  A BMI of 29.6 borders on the morbidly obese range, where the risk of obesity-related metabolic diseases (diabetes mellitus, hypercholesterolaemia, heart disease, hypertension) runs way higher.

76% of those surveyed attribute their weight gain to the lack of time or energy to exercise, with less blaming dietary patterns on their predicament.  Surprisingly, a much larger proportion of those having a high-income report having gained weight, compared to those of a low-income group.

Could this antithesis plainly be a reflection of our work ethic in Singapore?  If so, how much of our health are we sacrificing in the name of our careers?

Inasmuch as obesity is a true medical problem, there are lifestyle and dietary triggers that lead to an inexorable increase in weight and associated metabolic complications.  Once one is down the slope of a metabolic syndrome, the options for reprieve, while existing in the forms of bariatric surgery, will be more arduous than staving it off in the first place.  As it is with many other diseases, primary prevention is always better.

To find out more on bariatric surgery and how it can benefit your metabolic health, contact the Clinic for Digestive Surgery at +65 6570 2702 to speak to our Clinic Nurse.  Alternatively, drop us an email at doctor@clinicfordigestivesurgery.com, or fill up the enquiry form at http://clinicfordigestivesurgery.com/contact.  We will attend to you at the soonest opportunity.