Having a diagnosis of cancer is always a bitter pill to swallow, no matter how closely the published statistics resonate. Cancer is the leading cause of death in Singaporean adults aged 15-59 years. Cancer also accounts for 37% of all deaths in this age group, and is the 2nd most common cause of hospitalisation in Singapore.

The armamentarium in the cancer armoury is large and varied, with oncology surgery and chemotherapy being the two biggest weapon types. However, endoscopy is often a partner in this fight against cancer too. Endoscopy plays a supportive role, to allow the bridging to chemotherapy or surgery like an engineer. It is often used for palliation, to provide nutritional assess through natural orifices.

Endoscopic stenting is one way in which an occlusive cancer can be bridged. In the case of advanced oesophageal cancer or an occlusive stomach cancer where surgery is not the first option for treatment, a stent can be delivered and deployed via a gastroscope. This allows the patient to be able to regain back swallowing through the mouth.

Mr A came into the Clinic and was upset about his increasing difficulty swallowing. He had his whole stomach removed operatively 4-years ago for stomach cancer, after-which he had a full course of chemotherapy. He enjoyed a brief period of remission, but unfortunately has been having to deal with recurrences. The cancer had recurred at the anastomosis (the joint made between the oesophagus and small intestine after the stomach was resected), and also distantly in the abdominal cavity. He has been receiving further courses of chemotherapy and has been able to deal with the reality of recurrence fairly well. However, he was dismayed at being unable to continue imbibing in his regular meals. He enjoyed chicken meatballs that he used to buy from the roadside stalls, being the comfort food he has had since he was a child. Unfortunately, he has been unable to swallow the meatballs, no matter how fine he chewed. As a result of this difficulty, he lost significant amounts of weight, despite still having a full appetite. It was even affecting his mood to undergo further cancer treatment.

“All I want is to be able to swallow again”, was what he confided, disregarding even the looming threat of the distant cancer spread. He was certainly clear of his immediate priorities. We discussed the options and he opted with a stenting of the recurrent cancer. 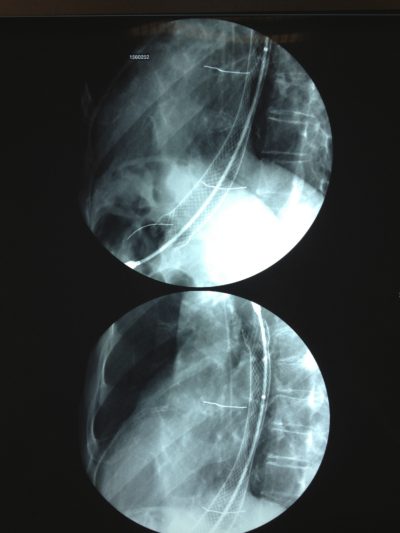 The gastroscopy showed the recurrent cancer had caused a severe narrowing of his oesophagus, causing even the passage of fluids difficult. Under the combined guidance of the gastroscopy and x-rays, I successfully threaded the narrow aperture with a slippery guidewire that then enabled to passage of the stent, which was neatly packaged in a tight delivery system. Under continuous x-ray guidance, I was then able to deploy the stent to open up the passageway past the cancer.

Mr A, upon waking from the sedation, could sense a difference immediately. He was able to again swallow his saliva without regurgitation. He was then progressed onto a soft diet before discharge from hospital. He then returned back to his home country for recuperation before the next session of chemotherapy.

On his first follow-up after discharge, he had regained a large proportion of the lost weight and, most of all, his smile. He gleefully reported having been able to sneak in a few of his old childhood favourite chicken meatballs once again.